Spot Coolers: what is Spot Cooling?

Although these solutions differ from each other in some aspects like their design, brand and sizes, they do have one thing in common, which is to cool the air in the space where it has been installed.

In this article, we will be introducing you to Spot coolers and it’s functioning.

What are Spot Coolers? 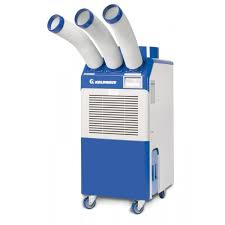 A spot cooler is a self-contained, portable type of air conditioning system, whose parts (the compressor, condenser, evaporator coils, fan systems and vents), are all encased within a single insulated cover made out of plastic or metal.

Spot coolers are generally used for cooling specific areas or sections of a room, through a process which is known as spot cooling. Ideally, the most optimal use of a spot cooler is within spaces where a constant or consistent temperature has to be maintained.

Due to its versatile nature, spot coolers can be easily and quickly set up to create temporary cool environments at:

Spot coolers are also used in spaces where consistent and specific temperatures are to be maintained such as:

How do Spot coolers work?

Spot coolers like most air conditioning systems work on a principle of heat removal and dehumidification. Here’s how:

It should be noted that the circulation of cool air within the room and removal of heat through the outside vents occur simultaneously. The moisture removed from the air is collected in condensation tanks, which is then removed either manually or automatically.

While there are similarities between spot coolers and air conditioners, there are quite a few differences too. For instance, the spot cooler has components that are similar to those of an ordinary air conditioner. The process of cooling too is similar – warm air passes over an evaporator where it is cooled and excess water is captured. From the coiled evaporator, cool air is channeled to a spot through a nozzle while the captured water is drained away.

However the differences between the two units are as follows:

Converting the Spot cooler into an AC

Using the air duct kit will enable the condenser to draw air from outside and pump away hot air from inside.

Does this conversion enhance the performance of a cooling solution? Yes, this modification enables the system to cool a room faster than an ordinary spot cooler.

However, if you are satisfied with the performance of your spot cooling system, then there is no need to incur an extra cost by modifying your air cooling system.

Here are some reasons to convince you to choose spot coolers:

Spot coolers are therefore a quick, effective, reliable and eco-friendlier type of air cooling solution, suitable for both homes and other spaces.

Welcome to The Air Geeks!
We help you choose the right air product for your home. Happy browsing!

Our take on the best portable air conditioners on the market in June 2021:

Our tips per brand

You are reading:
Spot Coolers: what is Spot Cooling?

Thank you! With ♥, The Air Geeks